It’s been a bit of time since I’ve last written.  The primary reason for that is that I’m just too busy at work.  And I love it!  Recall back at the end of May, I wrote this piece about good technical interviews.  That interview was with IBM and it was for a network architecture role in the cloud side of IBM’s business.  The team I interviewed with is responsible for the architecture and design of the network that underpins IBM’s cloud and hosting infrastructure across the world.

I got the job and started in late June of this year.  I couldn’t possibly be happier, and I intend to explain all of that in this post.  But first, let’s go through the last two years of my employment hell.  It’ll help paint a more clear picture of why this is such a perfect role for me.

In early June of 2017, I was part of a small, eight percent layoff at Verisign.  I’d been there for over four years at the time, as their data center network architect.  I’d finished up a long-term project that I was working on for their data centers, and was pushed out the door.  Unfortunately, it’s usually pretty rough finding a tech job in the summer; there’s a sine curve of hiring throughout the year, and the summer is often times the trough of that sine curve.  It picks up in the fall.  I looked, looked, looked, applied, applied, applied, but had no real luck.  QTS Data Centers needed a Senior Network Engineer for their northern Virginia office.  It was a role I was fairly over-qualified for, and they couldn’t even come close to the pay I was making at Verisign.  But the recruiter I spoke with mentioned they were planning more data centers in Northern VA, and they’d need more architects in the near future.  I figured I could do hands-on network engineering until then; I interviewed and got the job in November.

That good news didn’t last long.  In January of the next year, QTS’ CEO decided to pivot his entire business, and he planned to sell off the portion of the business I’d just been hired to.  A massive layoff was planned for that coming August (2018).  Large enough that it triggered the WARN Act.  Good grief!  Everyone I was working with including my boss (and his) was notified of their pending layoff, and given the choice to stay until August in which time a nice severance package and bonus would be paid out.  Over the course of the first half of 2018 I looked (and looked, and looked).  I even interviewed with and came within a hair’s breadth of being hired at Cumulus; one of the reasons I’ve written so much about their OS on my blog.

Unfortunately, nothing panned out for me until late 2018 when I was hired as an “Architect” (I use quotes for a reason) at ePlus.  I was thankful to have a role and some income; in fact a fair bit of it.  But the job at ePlus turned out to be a complete bust.  They’re a VAR, or Value Added Reseller.  I thought I was going to be using my network architecture skills to help clients design network solutions.  No, as it turns out, that wasn’t why they hired me.  They hired me to do post-sales network installations including rack-and-stack in data centers.  But, the problem is: they never generated any business in which they could use me.  I had nothing to do, literally.  My manager assured me that it was OK; his entire organization was currently only utilized at about 23% but he was expecting more business to be drummed up by sales, “Any moment now.”  It never did.  I spent time trying to socialize with others in the company to see if there was something I could do to help.  But no luck.

April, 2019: Laid off again.  And this time with no severance to mention because I’d only been there for four months.

Big Blue to the Rescue!

At the point of my interview with IBM I was in a pit, both professionally and mentally.  But that didn’t last long at all.  I’ve already described the interview, but what I didn’t put in that previous post was how much fun I actually had during it.  Laughter.  Quite a bit of it, in fact.  The whole group and I had a genuinely good time during that hour long phone call.  They seemed far more interested in all of the stuff I’d accomplished over my near 25 years of networking in a data center, and weren’t at all concerned with the three recent layoffs in two years’ time(!)

It got better.  While talking with the hiring manager, I found out that he lives and works in the state of PA.  Not far, in fact, from the Carlisle fair grounds where there’s a large Corvette show every August.  I said, “Oh!  I’ll be up near you for the Corvette show in August.”

Before my official job offer arrived from IBM, he came to Virginia to meet with some other folks and we scheduled a lunch outing to meet in person for the first time.  While we ate, he asked me about my Corvette to which I had to admit to having sold it in May (to pay my mortgage!)  But that I used to drive the snot out of it at the local race track.  “Oh cool!  I used to race my Porsche while I was in Florida,”

Remembering his previous “THOSE guys” comment, I replied, “Sorry about your car, man.”

“I haven’t officially hired you, yet!”  Yeah, we’re off to a fantastic start here.

The group I’m in is dispersed around the country.  I’m in northern VA.  Three of the guys are in the Dallas area.  One in or around Las Vegas.  And my manager is up around Harrisburg, PA.  The way he figures it: the entire team is working with folks in IBM that are stationed all over the country (and sometimes the world!) so there’s really no need for us to be centrally located.  IBM has excellent internal communication systems for us to make use of, so we can stay in near-real-time contact with each other throughout the day.  Think: email, Slack, WebEx, and that old fashioned phone thing if need be.

And that means: working from home.  Permanently.  Which is perfect.  In fact, it’s better than perfect.  I don’t have to worry about a morning or evening commute.  The only traffic jams I run into on a day to day basis is tripping over one or both of my Labrador Retrievers while I try to get to my office here at home.  My office is set up the way I want it, and has all of the isolation from noise, annoying conversations, etc that make up every office building across the world.  As an introvert, this is a HUGE bonus to me because of how draining it is to having people around me all of the time.

My office-mates are the aforementioned Labradors who will remind me that they’re there every so often.  Out of the blue, they’ll decide it’s time to start wrestling and chasing each other up and down the hall, into and out of my office.  That’s two hundred pounds of Labrador charging through the house, and they’re not the most agile of animals.  But: it’s hysterical.  And it relieves my intense focus on my work from time to time, which is exactly what I need.  It reminds me to get up and move around, which I do and chase them out of the office.

Dogs really are the best office-mates in the world.

The work is excellent.  I have trouble explaining to folks just how much I enjoy what I’m doing at IBM.  I can’t and won’t get into the details of it, but given my proclivities and all of the technical writing I’ve done on this blog, it’s probably pretty easy to figure out what I’m up to.  From a generic perspective: network architecture, on scales I’ve not done before.  And I love it.  This may seem like a potential down side, and I can see that side of the argument: I’m so enthralled with what I’m doing that I often find myself putting in 13-15 hour days.  There’s no commute to worry about, and my “work” area is the same as my “play” area.  My gaming rig shares the same desk area as my work laptop; in fact I use my three 4K displays for work just by switching over to their respective HDMI inputs.

This is a challenge for me.  I usually start working at around 0700 or so, depending on how long I’ve taken to wake up, work out, shower, play with the boys, etc.  At around 1700-1730 or so, I’ll check out for the day and make dinner.  I eat dinner and watch something that lasts for about an hour.  That means that around 1830-1900 or so, I’m usually back in my office to play some games.  But… my laptop is right there.  And work is soooooo enjoyable.  Maybe even more enjoyable than the games I’ve been playing.

Really.  More enjoyable.  So I sit down and start working.  Then I look at my watch and it’s past 2200.  Hell, maybe I should get to bed…

I really do enjoy what I do, and I enjoy working with the folks that I am.  We sling crap at each other all day on our online chat channel, and then pivot 180* and start helping one another with something at work.  At a moment’s notice, we’ll pivot 180* again and start chopping each other to bits.  It’s fun, it’s educational, it’s…

…exhausting.  In a good way, but it’s still exhausting.  I’m not 26 any more, I’m 46.  I can’t do 15 hour days like that without it affecting me.  And I’m actually starting to notice that by Thursday, I’m wearing thin.  This isn’t a complaint; not even remotely.  That is unless I want to uselessly complain about getting older.  I simply can’t recover from a bunch of 15 hour days in a row like I could when I was in my mid-20s.

That’s frustrating.  Frustrating because I’m so thoroughly enjoying my job that I’m happily working myself to death. 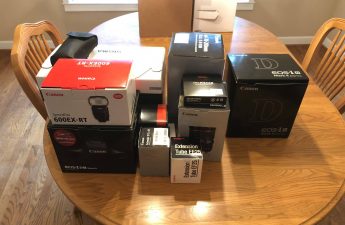 Gear Whoring: No More Photography For Me