The Virtual Network: Before

FRR On The Router

The Virtual Network: After

I’ve been building up my Cumulus Linux and FreeBSD virtual network over the course of the last several months.  As you’ll recall from an earlier post, I decided to put a single aggregation router at the top of the network as an ingress and egress point.  This allowed me to put a single static route for the entire virtual LAN and set it to the interface on the router.  And it also allowed me access to the network even if I had to reboot one of the spines.  However, with my recent work adding Free Range Routing (FRR) to my FreeBSD VMs, I thought of a different way to handle ingress and egress and remove a router hop.

The Virtual Network: Before

The following image has been used a bunch of times in my blog posts, but here’s what the “before” looked like: 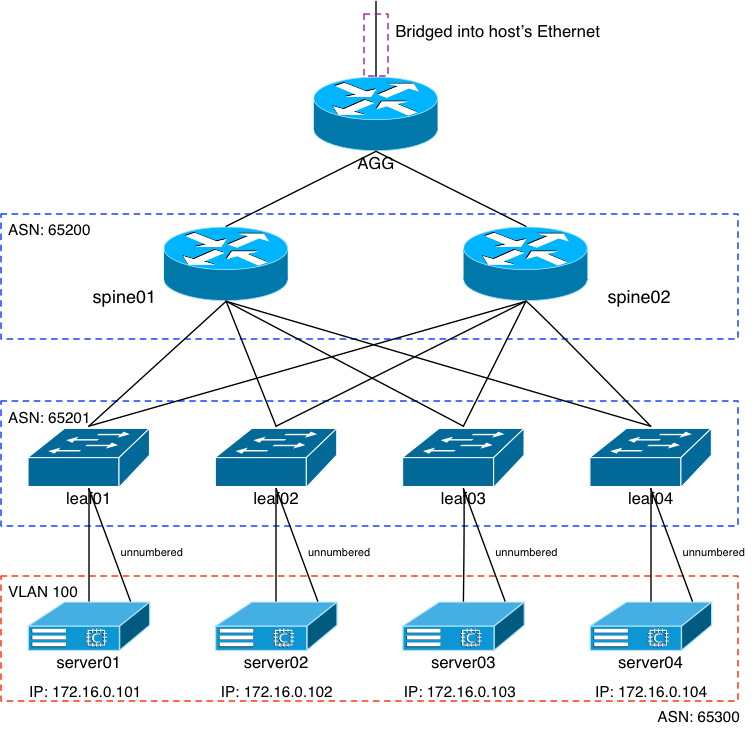 The AGG router at the top of the network served as the ingress and egress for that virtual setup.  I had a set of static routes on my host server as well as my home router, and even on my laptop all pointing towards the interface on the AGG.  The AGG interface served as a single point for those static routes to be set to, and I knew I wouldn’t be doing much with the AGG router at all once it was up and running.  All of my work with EVPN, VXLAN, etc would happen at the layer below the AGG.  The advantage there is that the static routes wouldn’t need to change if I, say, had to reboot SPINE01.

FRR On The Router

After finishing up all of the work on my previous posts which included installing Free Range Routing on FreeBSD, I decided to try it on my router as well.  I rebuilt my router as a FreeBSD device a few years ago, as outlined in this post.  Since I knew how easy it was to get FRR running on FreeBSD, I installed it on the router.  Once FRR was installed, I had to figure out how I wanted to peer it with the virtual network, how I wanted to handle the routing, etc. 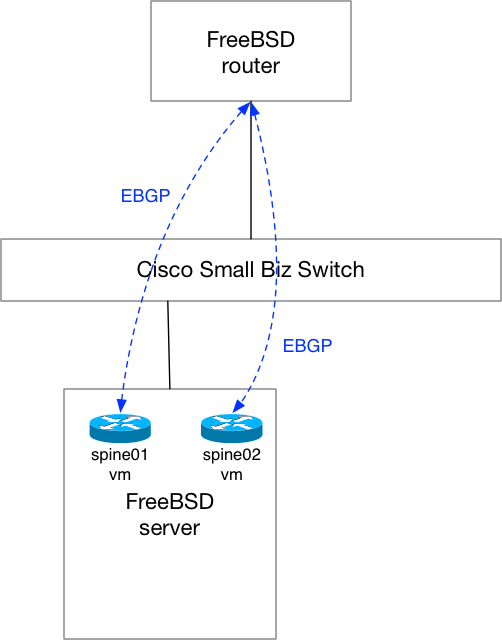 The router is connected to the same L2 switch as my FreeBSD hypervisor is.  You can see that I have EBGP arrows drawn between the router and the two spine VMs.  I’ll explain that in a bit.  But ultimately, the internal interfaces on both the server and router are on the same VLAN, of course.  And because of that, the router has L2 connectivity into the virtual network due to the bridging on the physical server.  Since L2 exists, it’ll be simple to get the routers talking BGP with one another.

The router already has an IP on my internal 192.168 VLAN.  Each of the VMs on my server also have their Management Ethernet interface on that same VLAN, so that I can perform maintenance.  I decided to add an alias to the router’s interface on a completely different L3 broadcast domain.  Since I planned to have three interfaces on that broadcast domain, I needed to use a /29.  In the /etc/rc.conf:

And then from the CLI so that I didn’t have to restart anything:

The intent was to peer two different spine routers with this device, which would make unnumbered not possible.  Therefore, the /usr/local/etc/frr/bgpd.conf:

The Virtual Network: After 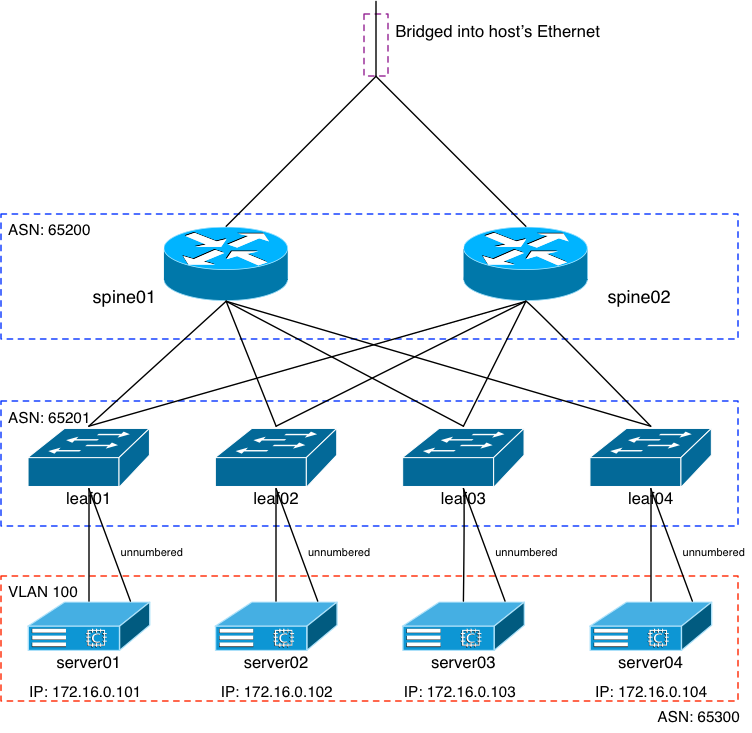 As you can see from the above diagram, it looks pretty similar to the “Before”, except the AGG layer is gone.  Instead, the swp1 interfaces on the two SPINE routers that were connected to the AGG router are now bridged into the host’s Ethernet interface.

The VM configuration change to make this happen was very easy.  In the config files for both of the spine VMs, I merely changed which switch their “network1” interfaces were connected to.  Previously, they were connected to switches that were shared with the AGG router.  But after the change:

That “private” switch is the one that’s shared with the hypervisor’s physical Ethernet interface.  In other words: the VMs would be directly connected to my internal private VLAN.

The config changes for the spines were handled by Ansible, of course.

The lines for the two spine routers were changed to reflect the IP addresses that would live on the swp1 interfaces:

Since both spines will be peering with the same IP address on the router, their respective BGP configurations would be identical:

In order for me to fire off the above Ansible changes and have them work properly, I would also need to write a series of commands to reset the previous configurations.  In other words, remove the previous swp1 IP address and remove the previous BGP peer with the AGG router.  Instead of spending the time writing those Ansible “reset” lines, I just went to each spine (there are, after all, only two of them) and manually reset those configurations.  I changed /etc/network/interfaces and /etc/frr/frr.conf respectively, and then:

on each.  Done.  Once that was done, I fired off the Ansible playbook command to get the interfaces and BGP configurations added.

It did.  Sort of.  From the respect of the spine routers it’s perfect.  They’ve peered right up with my home router and are exchanging routes without an issue:

However, remember I mentioned the EBGP multi-path not really working properly on my router?  Well, it’s due to the fact that the FreeBSD kernel, by default, doesn’t support ECMP.  A compile option needs to be added at build time in order to support it, and I’m not concerned enough to try and do that.  My router has a very slow, 2-core CPU in it, so building a new kernel on it isn’t really high on my priority list.  Since the kernel doesn’t support ECMP by default, the pre-built FRR packages for FreeBSD don’t, either.  So while there are no errors thrown in BGP when I attempted to enable ECMP, only one route was installed:

As you can see from the output above, I checked the forwarding table for the Anycast route I’ve been working with over the past few posts: 172.20.0.1/32.  The router sees two BGP announcements for it, and they’re actually identical from an AS path perspective.  But because I don’t have ECMP enabled in FRR (or the router’s kernel), BGP’s best path selection went all the way to the lowest router ID of 10.200.0.2.

Ultimately, that won’t make or break my lab network.  If I have to reboot spine01 for some reason, or re-do its BGP, or whatever, then the peer with spine02 will take over and I’ll still be able to get to the virtual network.  So BGP is still the right solution here, it’s just not quite as elegant as it would be if ECMP were supported.

Network Customization: At The Switch Or Server?