Nope, it’s not what you think.  Nothing was stolen from my house, thankfully.  Rather: it was stolen before it got to my house.  First a little back-story…

My gaming/editing rig’s operating system drive (C: in Windows-speak) is a Samsung SM951 M.2 AHCI drive.  It’s 500GB in size and is quite quick in comparison to most SATA SSDs and HDDs.  But it’s dying a slow and painful death.  Windows thinks it has “bad blocks” on it, and it really needs to be re-formatted slowly to have those blocks checked and marked unusable.

My intent was (and still is) to replace that SM951 with a new 960 Pro 1TB NVMe drive from Samsung.  They were announced last year (2016) and were supposed to be released in the fall.  Fall came and went with no signs of the drives.  I actually had a pre-order in with Samsung for one, but ended up canceling it when they seemingly weren’t ever going to produce and ship the units.

Then in November of 2016, Amazon started advertising the drives for pre-sale, shipping planned sometime in December.  I pre-ordered through them and just sat and waited.

And waited some more.

Fast-forward to 2 January, 2017, and my drive actually shipped from Amazon.  WOO HOO!  I received it a couple of days ago from UPS.  The shipping box was all sealed up perfectly with the “AMAZON” tape.  No signs of any sort of tampering whatsoever.  However, when I opened that box and retrieved the Samsung box inside of it, I was presented with this: 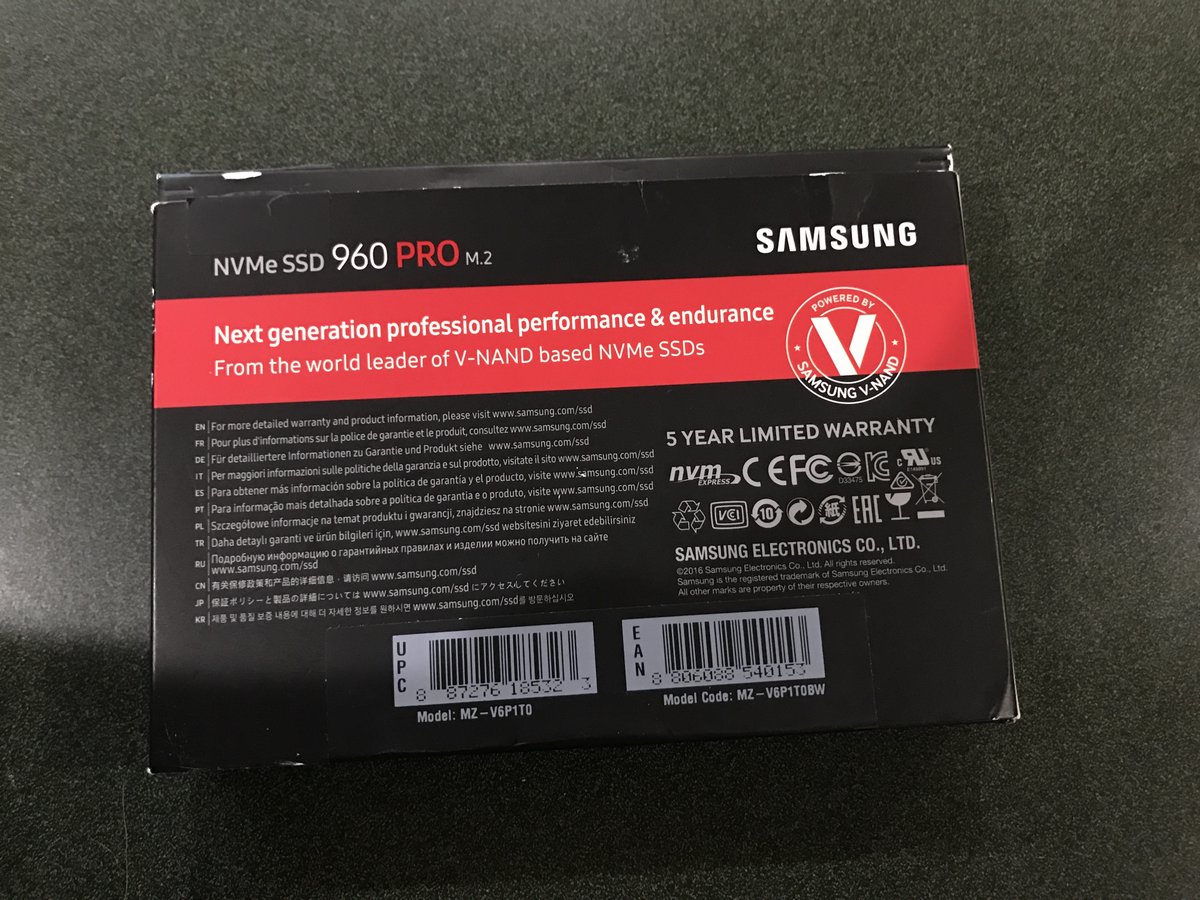 It’s hard to see, but in the upper left corner of that box, there’s a small piece of black tape that Samsung uses to seal it.  That was neatly sliced open.  When I opened the box, I found the padding for the drive, and the drive’s manual.

This theft happened at Amazon, not UPS.  Either the guy that packed the box, or the guy that sealed it with tape and shipped it.  Someone at Amazon has my 1TB impossible-to-get drive, and I’m just a wee bit pissed off.

I also don’t expect that person to continue to be employed by Amazon for much longer.  I’m sure that after I contacted Customer Service over the phone, an internal investigation was spun up, and the offender was probably found.  I do hope that drive was worth more than his job was.

In any event, Amazon promised to contact me by Friday (today) with news of the drive’s replacement.  They did, and unfortunately told me that they’ll ship it sometime between 31 January and 7 March.  Apparently the drives are just that unobtanium from Samsung; even Amazon can’t get them in a timely fashion.