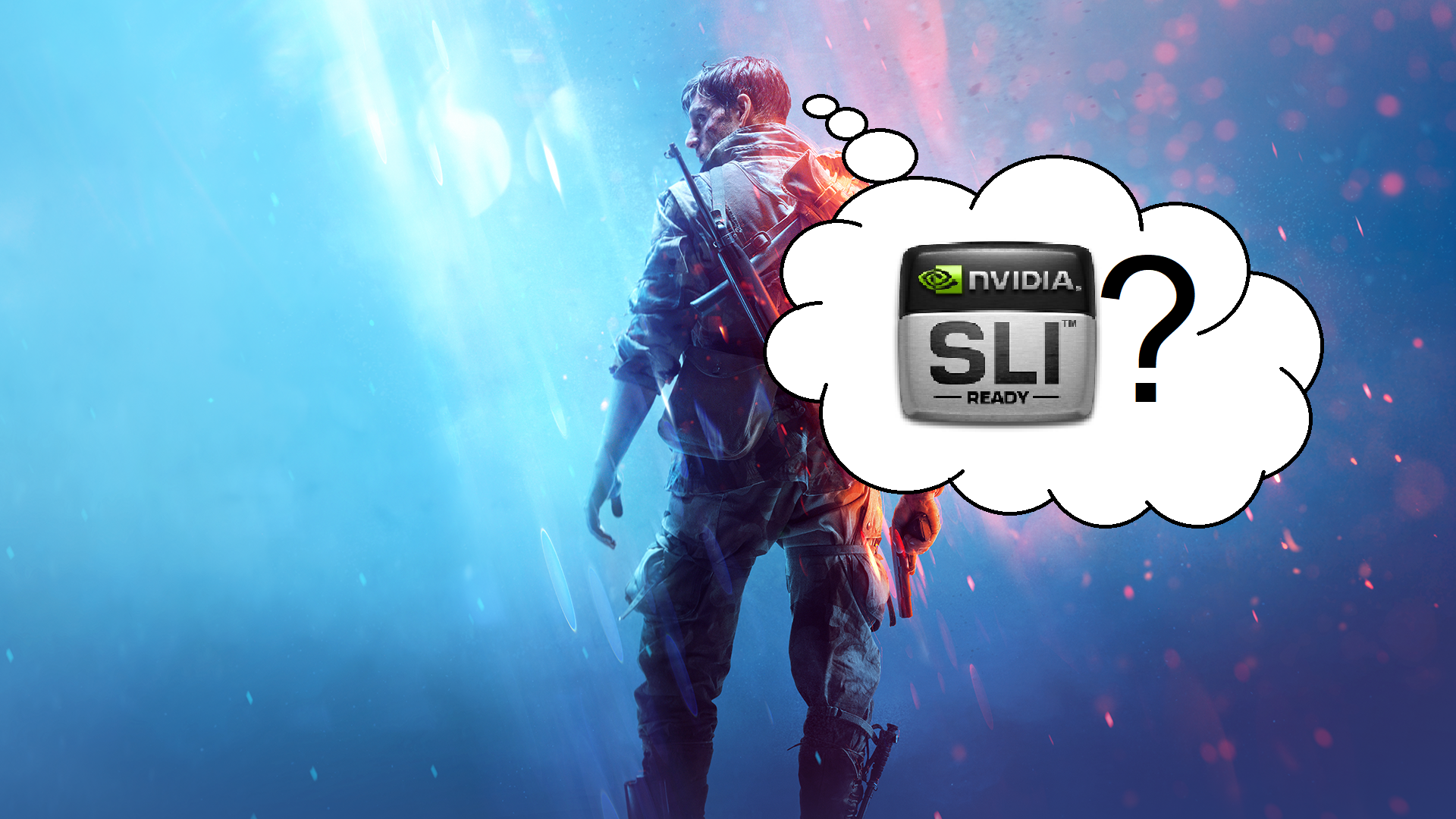 NVidia Inspector To The Rescue

NVIDIA predefined number of GPUs to use on SLI rendering mode

The release of Battlefield V hasn’t gone without quite a number of hitches.  From various annoying bugs, to Dice’s incessant fiddling with weapon balance and damage models.  And we’re only about a month in to it as of this writing.  However, one important thing for those of us using NVidia’s SLI technology is: there’s no support for it.  Battlefield V will happily send your single GPU right up to 100% utilization, but it won’t touch the second one at all.  Fortunately, it’s easy to fix, and I’m going to document two ways to do so in this post.

Please note: what I’m going to discuss in this post is centered around Battlefield V’s DX11 mode.  The game clearly states when you enable DX12 in the Advanced Video settings that multi-GPU isn’t supported.  And unfortunately, no amount of playing with SLI configuration in Windows will change that.  It’s something Dice will need to do.  So again: this is all for DX11 only!

The reason that Battlefield V won’t use more than a single GPU in DX11 is that it actually has an SLI profile, and the profile is locked on Single GPU.  Let’s take a look at that by opening up the NVidia Control Panel (henceforth: NVCP).  Refer to the image below for hints, but click on the Manage 3D Settings on the left side, then the Program Settings tab.  Click on the drop-down and find Battlefield V (bfv.exe). 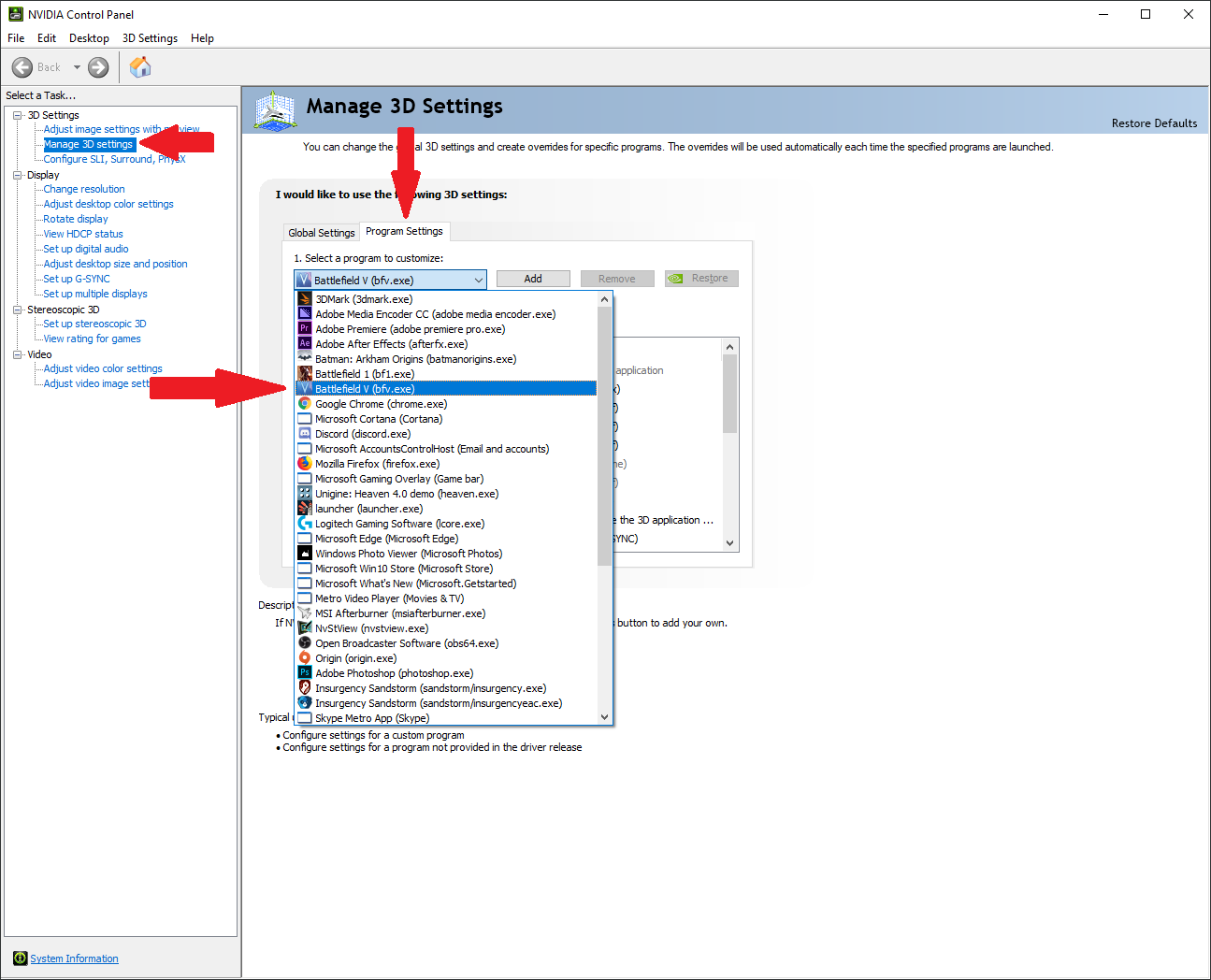 Scroll down a bit to the SLI rendering mode section and you’ll see the reason.  It’s hard-set to Single-GPU. 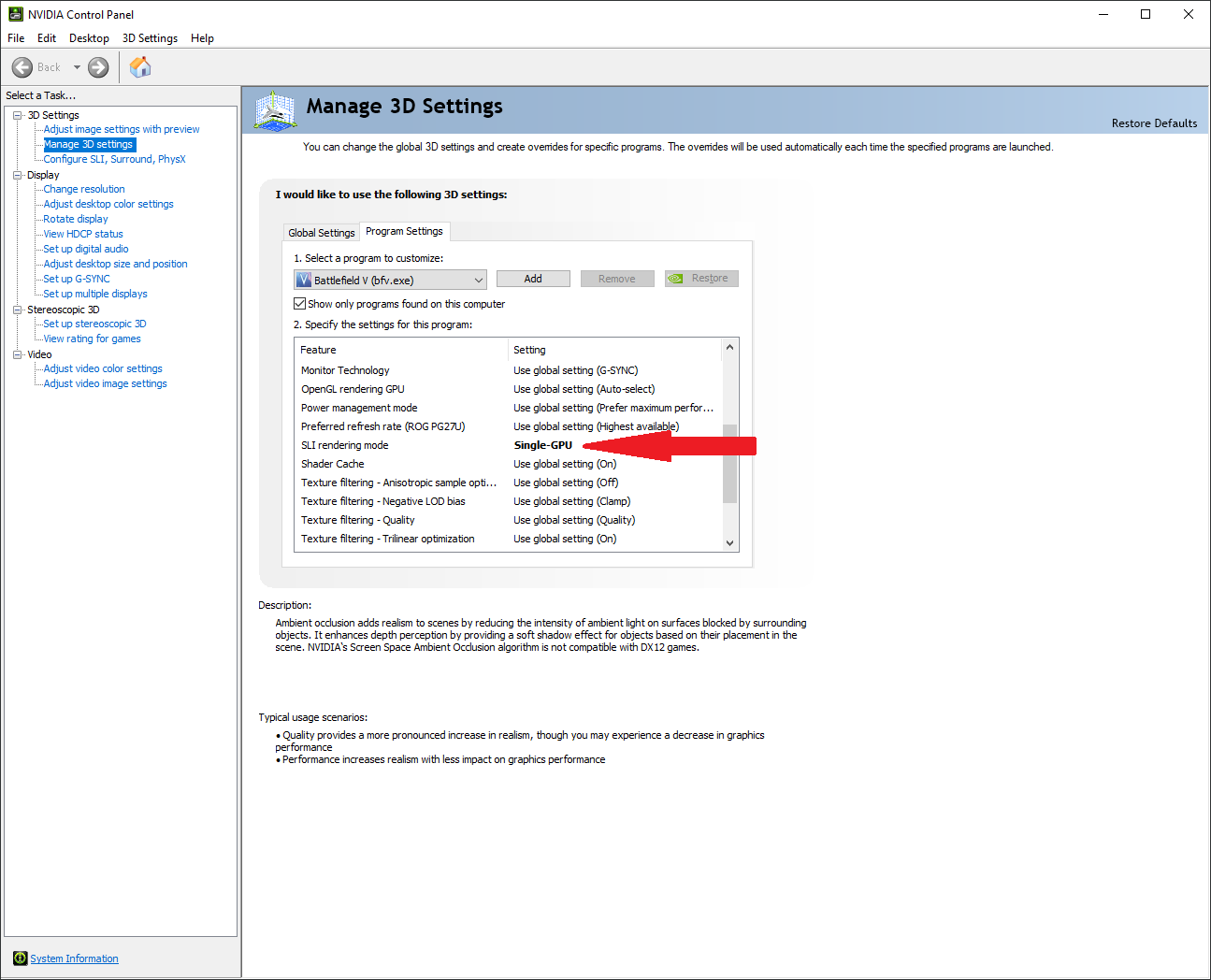 You’re welcome to try and change that in NVCP, but the moment you try to Apply your changes, it’ll kick back to Single-GPU.  The reason is that it’s set in a profile that we need to change.

NVidia Inspector To The Rescue

To make the changes to enable SLI in Battlefield V, we’re going to need a handy little utility called NVidia Inspector.  It’s NOT published by NVIdia, nor is it supported by them.  From hence forward, what you’re doing is NOT supported by EA, Dice, or NVidia.  You’re on your own here.  But don’t worry, you won’t hurt anything.  And if you muck something up, a quick driver re-install can reset everything.  Let’s download the inspector from here.  You’ll end up with a .ZIP file; the executable is inside that.  It doesn’t have an installer or anything; just stuff it away in a folder somewhere and run it when you need to.

There are two different changes you can make; I’ve done both and have found no noteworthy advantage between one or the other.  So I’ll present them both, and it’s up to you.  But remember, only do ONE of these:

This path will have us editing specific aspects of the existing Battlefield V SLI profile.  Fire up the Inspector and type in Battlefield V in the drop-down.  It’ll find the proper profile for you. 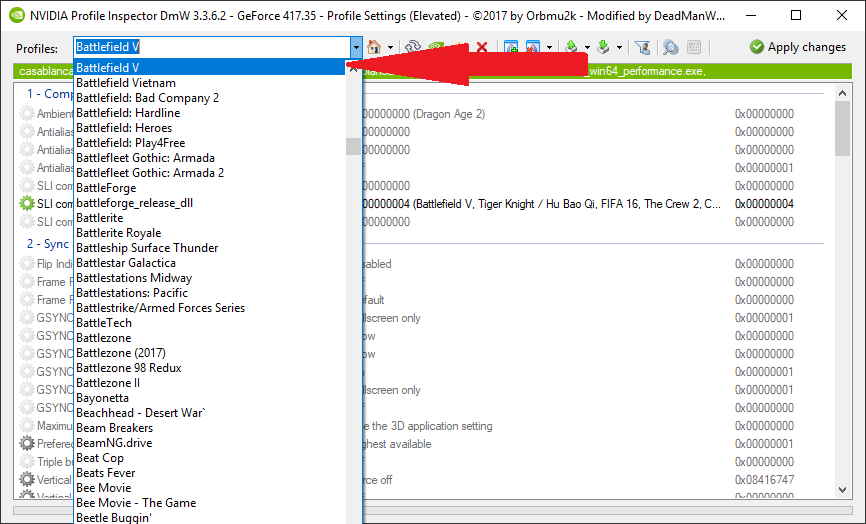 We’re going to change three aspects of the profile and that should do the trick.

Find this section in the profile and hit the drop-down.  The choice you’re looking for is 0x080116F5 (Act of Aggression, Battlefield 3, Battlefield 1, Battlefield 4, ….).  Select that one, as shown below: 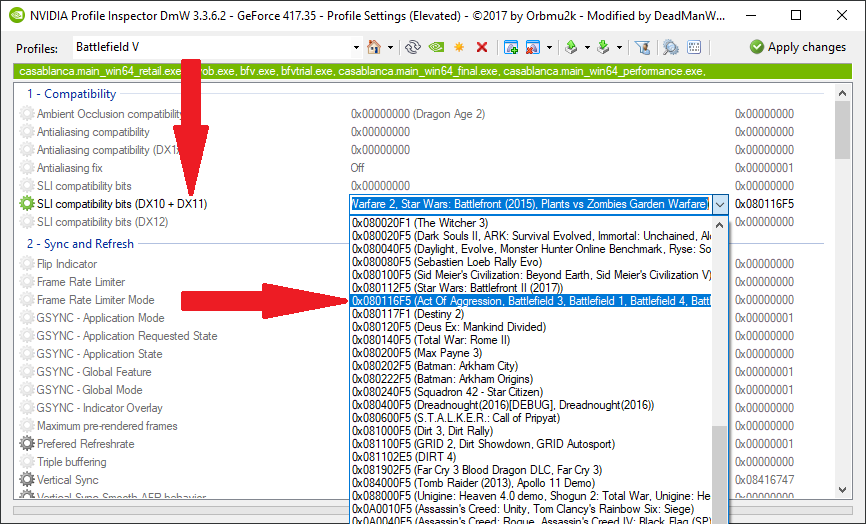 NVIDIA predefined number of GPUs to use on SLI rendering mode

This one is a bit further down in the profile, in the SLI sub-section.  Change the drop-down to 0x00000004 SLI_PREDEFINED_GPU_COUNT_DX10_FOUR. 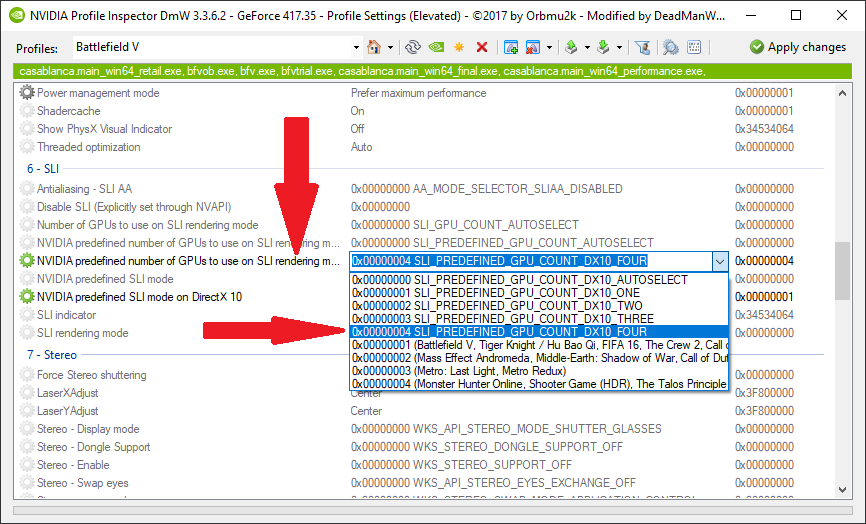 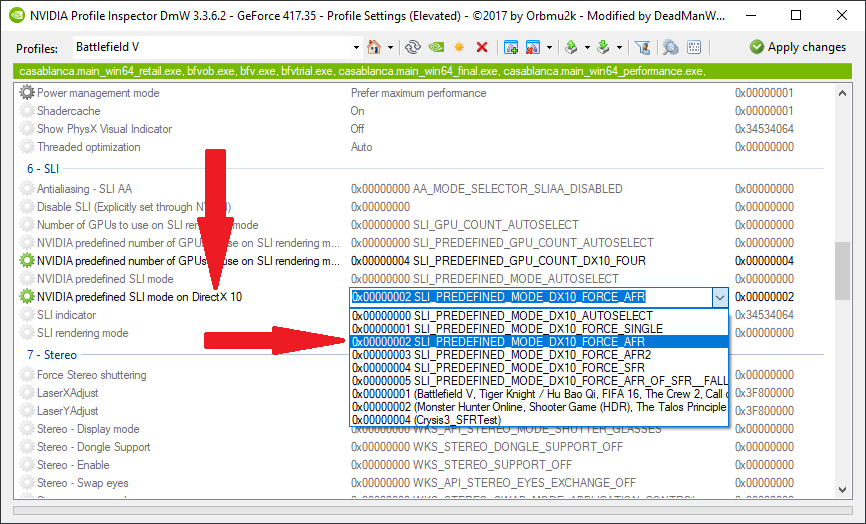 At this point, you’re done with the edits.  Hit the Apply changes button and quit the Inspector. 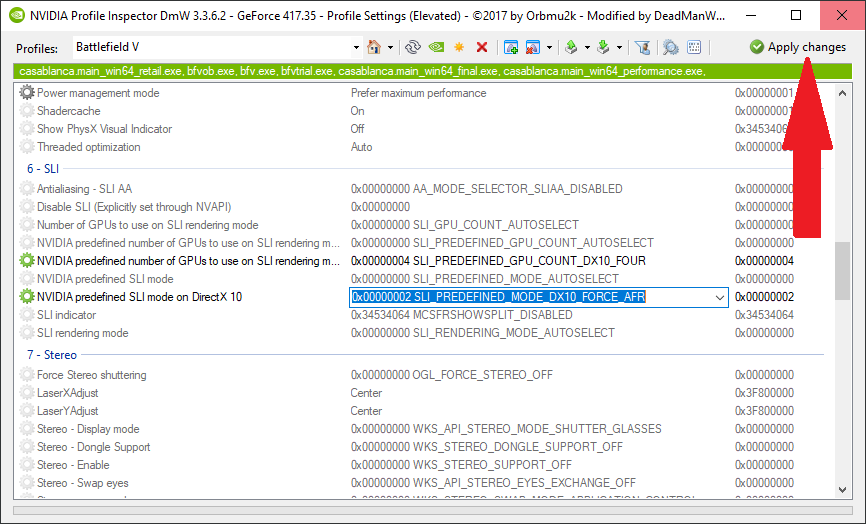 Head back into the NVCP to check our work: 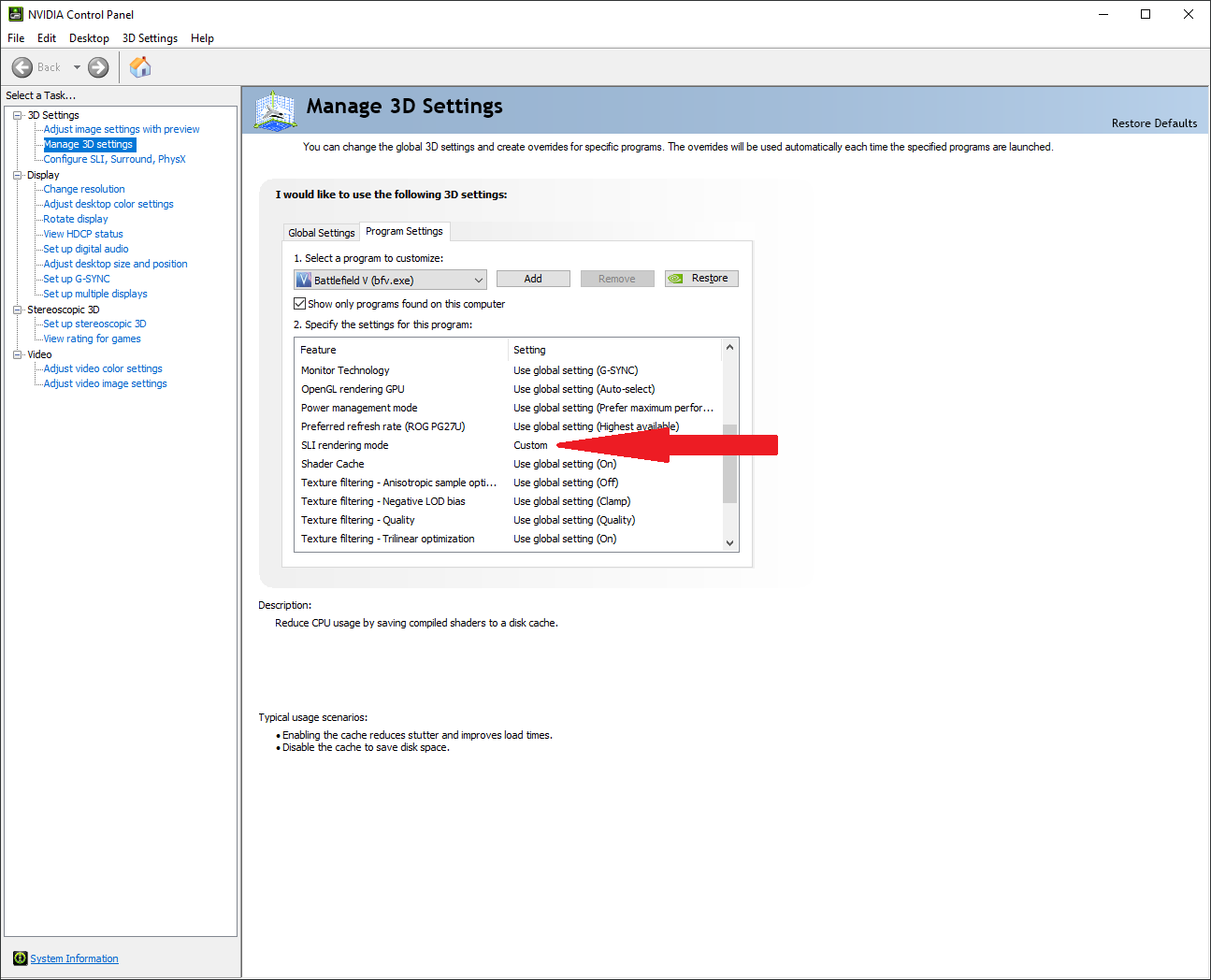 You can see here that the SLI mode is now Custom.

With those changes, Battlefield V will use both GPUs.  You can do those previous changes, or:

A slightly easier route to take involves removing the Battlefield V executable (bfv.exe) from its current SLI profile, and moving it to Battlefield 1’s profile.  The steps are as follows:

Again, call up the Battlefield V profile like before.  But instead of editing anything, we’ll just click the “Remove” button, hold it down, and select the bfv.exe binary. 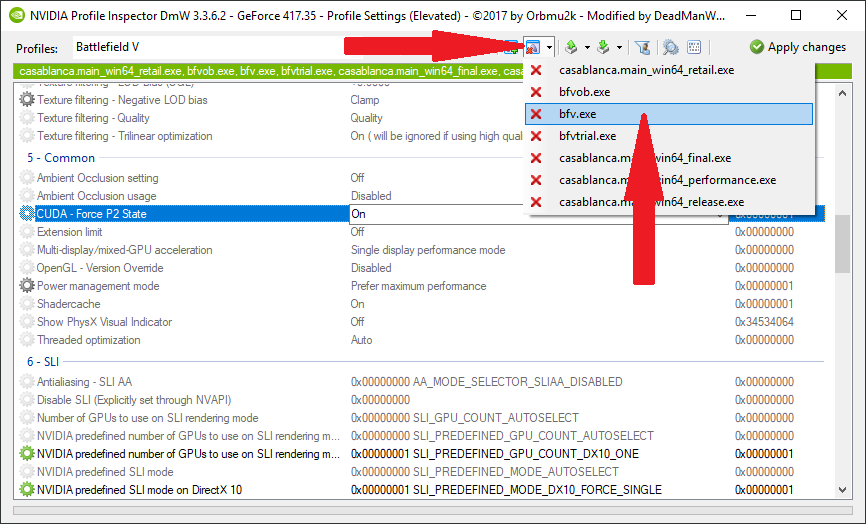 In the main drop-down, call up the Battlefield 1 profile.  Click on the Add button and a dialog will pop up.  When it does, find your bfv.exe executable, which is buried somewhere on your Windows drive. 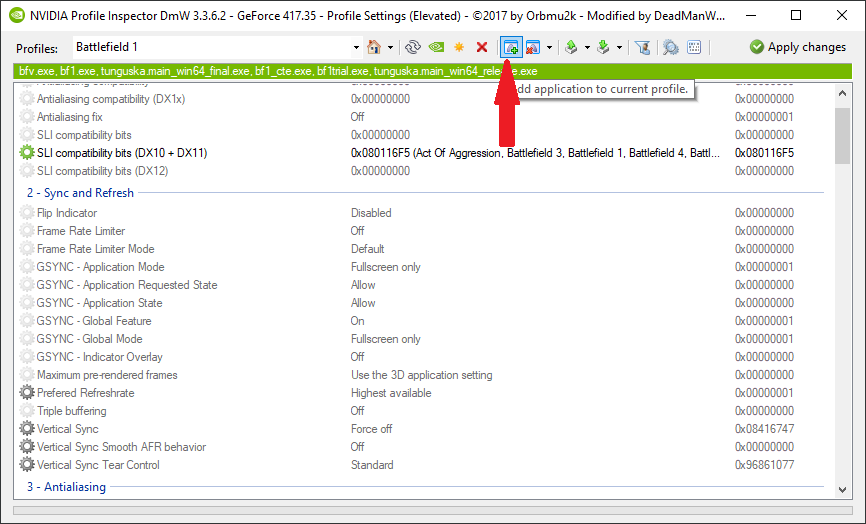 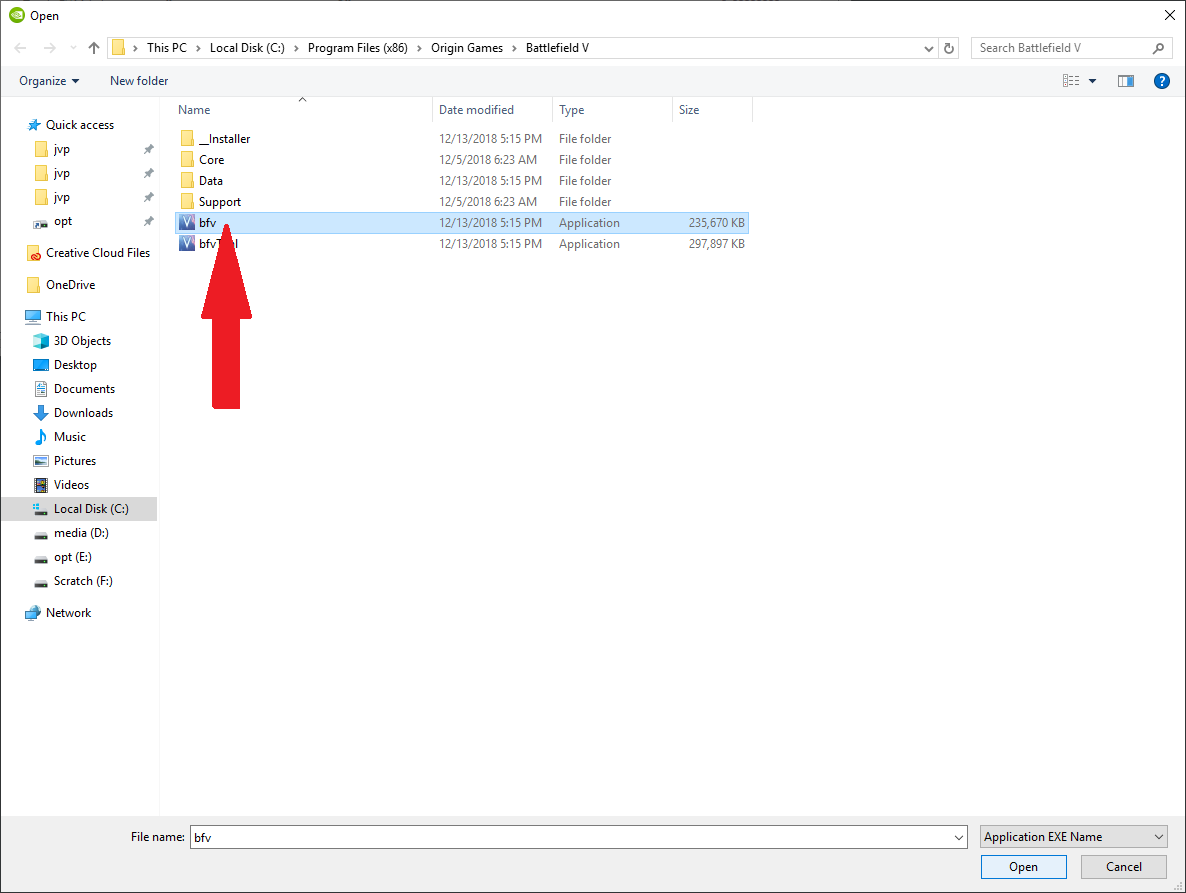 Head back into NVCP and check the Battlefield V entry.  You’ll see that: it’s not there any longer.  Instead, you’ll have a Battlefield 1 entry, or a second one if you have Battlefield 1 installed.  The difference is that the one we just changed will have (bfv.exe) after it. 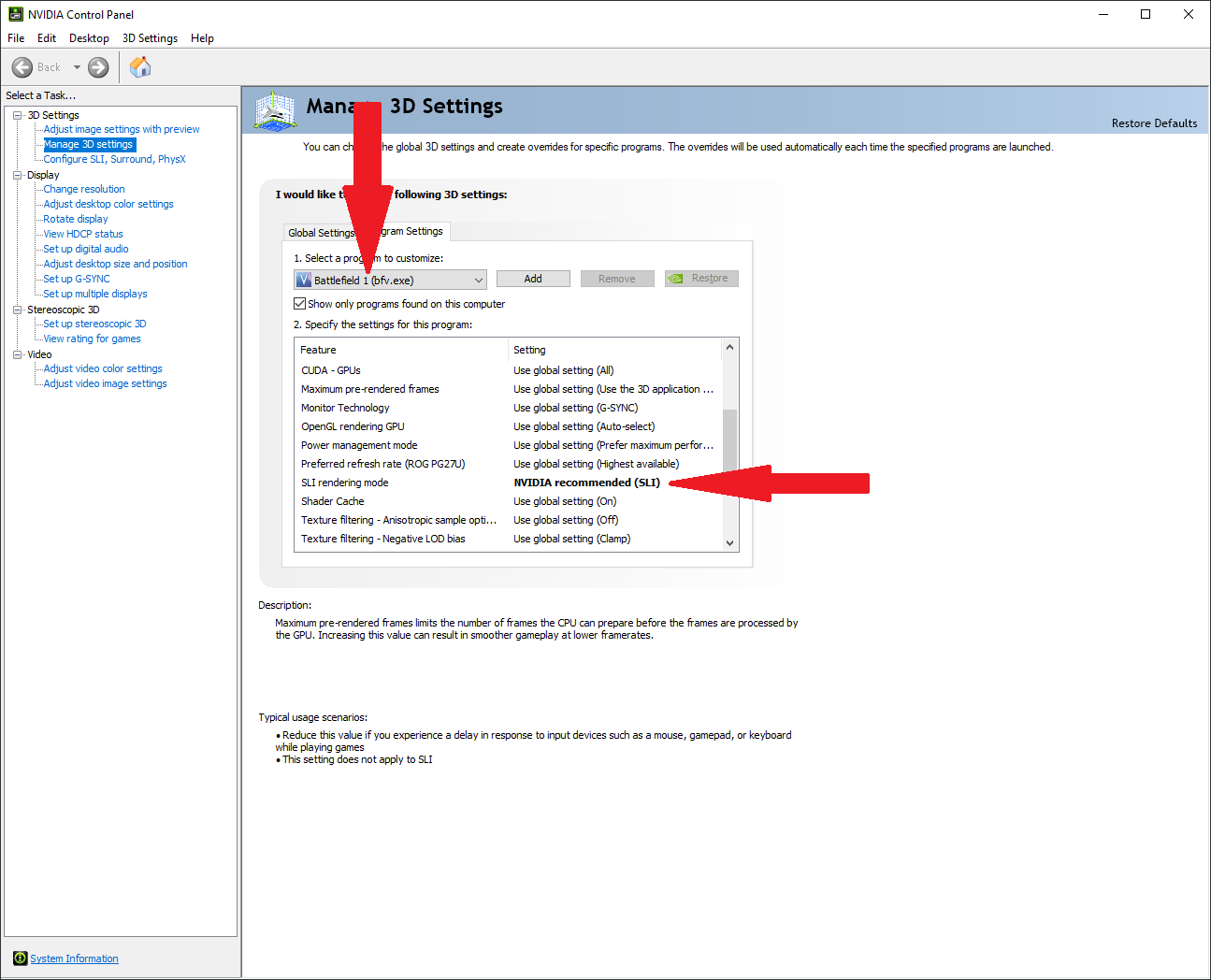 Scroll down to the SLI entry and you’ll see NVIDIA recommended (SLI).  You’re in business.

After you’ve made one of the two changes above, you’ll want to change a few more things.  One of them is in NVCP, the other two are in the game.

If you notice any strange lines or visual glitches once you’ve made these changes, you’ll want to force anisotropic filtering on in NVCP.  Set it globally to 16x: 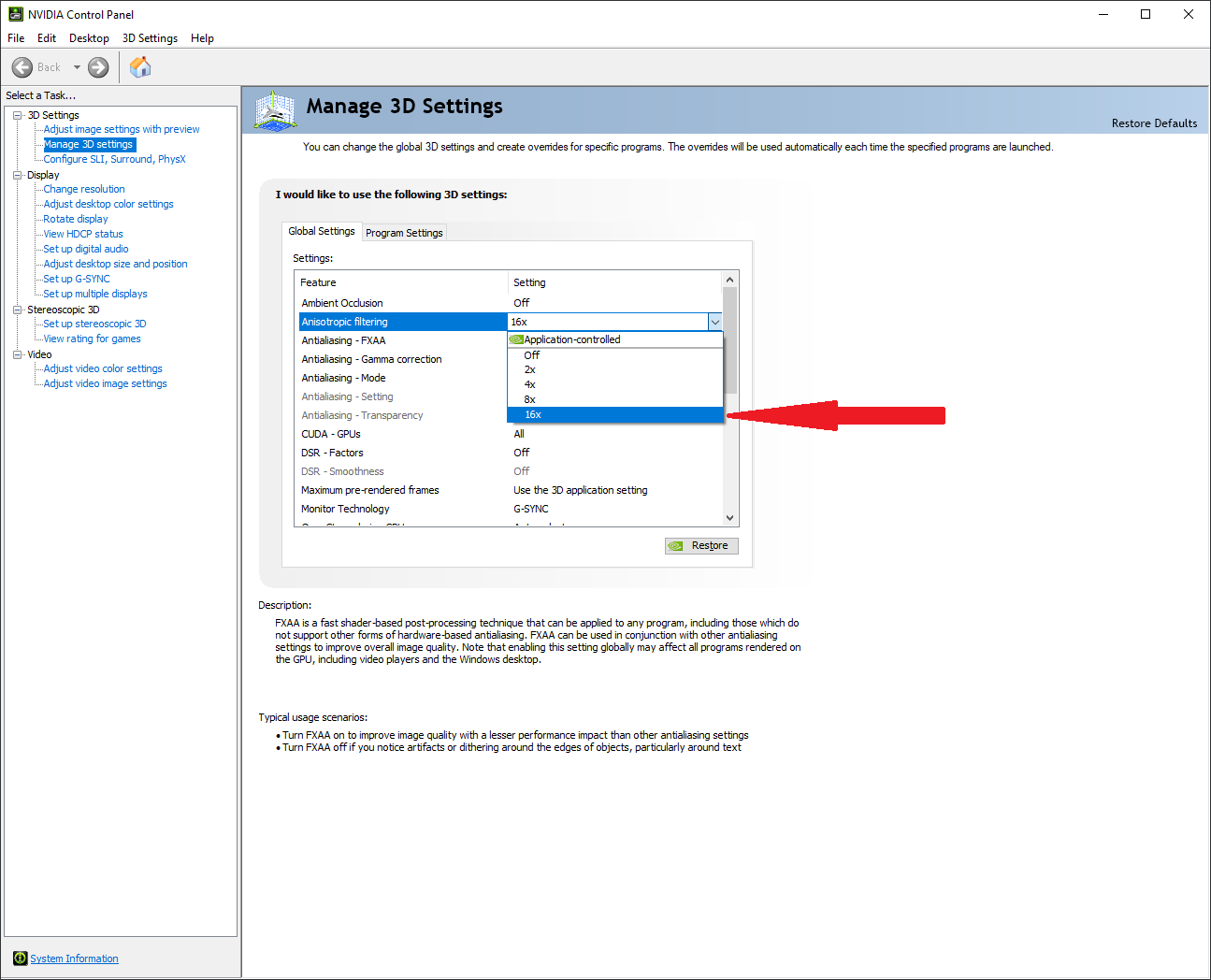 Head into Battlefield V’s video settings and make sure Motion Blur is set to 0%, and Future Frame Rendering is set to On.

As of the current NVidia driver, which is 417.35, these steps are still required.  According to the NVidia Geforce forums, they’re planning to work with Dice to cook up a proper SLI profile for Battlefield V.  Until that time, if you want Battlefield V to use your SLI’d NVidia GPUs, you’ll need to perform one of these steps.

Also, every time you install a new driver, you’ll need to do these steps.  So keep that in mind as well.  And with this “hack” in place, you’re going to be missing out on some of the weather particle effects like the snow and dust blowing around.  You’ll still get blasted by the fog; that’s not a particle effect.  But the snowflakes and whatnot won’t be rendered properly.

1 thought on “Battlefield V and NVidia SLI: Making It Work”