Exporting the Filesystem: NFSv3 and NFSv4

In the last entry, I went through the thought processes and steps behind bringing up a new storage server called bane using FreeBSD (10.1) as the OS.  The intent with this post is to explore the filesystem exports.  Bear in mind that bane is doing a few other things like acting as a MySQL server, a local GIT server, and a few other things.  I’m going to focus on the file exports in this post, and then perhaps add another one explaining the other things bane is doing.

Exporting the Filesystem: NFSv3 and NFSv4

First and foremost, bane’s job is an NFS server for all of my other UNIX (FreeBSD, Linux) servers.  I’m not keen on using NFS in a production set up, such as a data center.  It’s far too fault in-tolerant and rife with problems.  Think of it as Sun Microsystem’s practical joke on the UNIX world in the mid-80s.  But for a small set up like what I have at home, it’s far more than adequate.

This one was easy.  It’s the same set up for an NFS server that’s existed for… ever.  To configure a FreeBSD host as an NFSv3 server, it takes editing the /etc/rc.conf file:

And the /etc/exports file, of course:

(I’m OK with my local servers having root access to the NFS file system).

Done.  Fire the daemons up as needed:

And I had an NFSv3 server.

My former QNAP didn’t support NFSv4, so this was a new one for me.  It was a bit tricky and caused a little slamming-of-my-head-into-my-desk.  NFSv4 servers and clients have to agree on a domain, which is configured on both sides.  And in order for you to be able to see proper UIDs and GIDs of files, it requires a user and host agent to be running.

And to /etc/exports file.  I had to note it’s a V4 export, and to reference the system UID and GIDs for the file ownership and rights:

At that point, I needed to start the nfsuserd, and restart the other daemons:

Voila: an NFSv4 server, too.

Now remember that I converted my main VM named joker over to FreeBSD.  I used this opportunity to learn how to handle NFSv4 mounts from the client side as well.  Mounts from a client via NFSv4 do not reference the entire export by name.  They merely call server:/.  So in my case, joker (the client) would mount bane:/ on its /opt directory; had I used NFSv3 with joker, it would have been bane:/local/exports.

This difference is key and one of the things that can confuse you.

The entries in /etc/rc.conf for joker looked like this:

Both client and server have to run nfsuserd and agree on the domain name.  Further, a client has to run hostid as well.  With that, an entry in joker‘s /etc/fstab:

I made sure the various daemons were running on joker, and then a simple:

I have a Windows box in the house that I play games and edit videos on.  I also have a Macbook Pro laptop (which I’m using to post this) which I use to do most everything like surfing, email, etc on.  And I have a Mac Mini in my living room, connected to my stereo receiver; its job is to play my DVD and Blu-Rays.  The Macs can use Apple’s File Protocol (AFP), but their performance over Samba-mounted filesystems is actually comparable, if not better.  And the Windows box can only handle Samba, so:

That installed the needed Samba daemons.  The important file to start with was /usr/local/etc/smb4.conf.  Fortunately a lot of its defaults were good.  I set a few of the variables accordingly, including denoting the Samba-specific passwd file:

With that, I could create a new smbpasswd file and add my user to it. I also added a user called movies so that my Mac Mini could mount the /local/export/movies directory:

What’s adding a new service to FreeBSD without (once again) editing /etc/rc.conf?

Once I started it up:

I could see it from my Macs and my Windows box.

As much as I love Macs, I’m not much of a fan of AFP.  It’s a clumsy-to-set-up protocol, and the dot-files it leaves scattered all over the filesystems are a bit silly.  However, I intended to set the fileserver up as a target for my laptop to Time Machine itself to.  And that’s just easier to do if the Mac can find an AFP-speaking server.  So, with that:

The config file is /usr/local/etc/afp.conf.  The directory I intended to export was created in the last post: /backups/timemachine.

Yet another entry in /etc/rc.conf to top it all off: 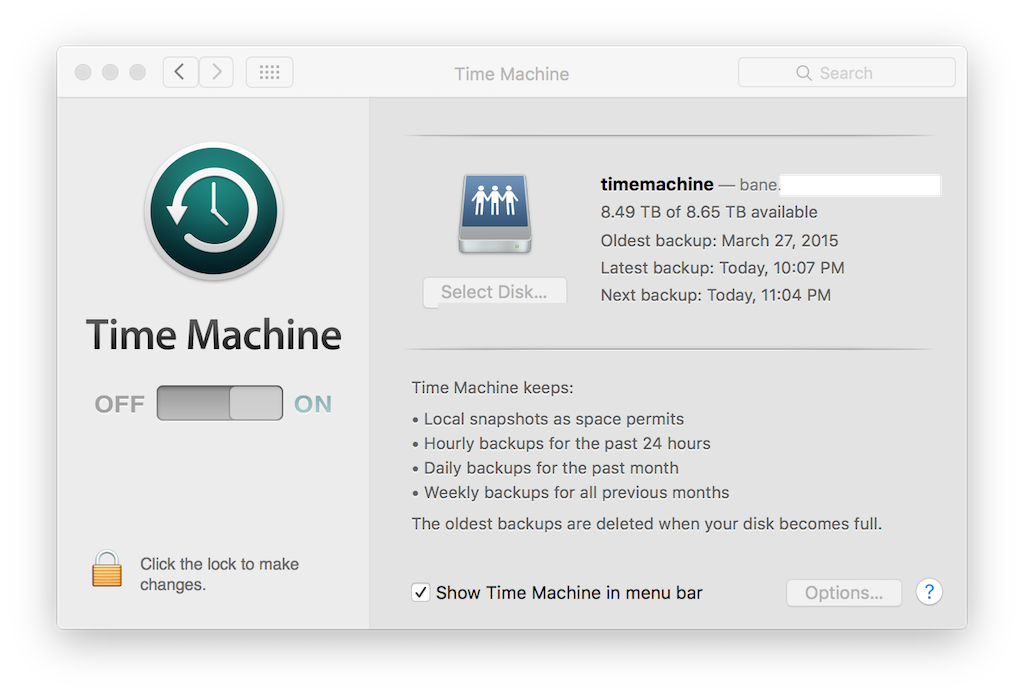 And my Mac could then see it for Time Machine.

At that point, bane was successfully exporting its filesystems via the 3 protocols I’d intended.  I’ll whip another post explaining some of the other services bane was set up to handle.